Our 1st Ever Birthday Party!

Grace Ong celebrated her 14th birthday on... the 14th of October! Yes! It was the sporty girl's golden birthday and Tea Talk was proud to be the choiced venue by her parents!

Friends from her school as well as those who have seen her grow through the years showed up earlier than she did so as to throw her a surprise. Her parents did a great job in hiding the secret. But the 14-year old outsmarted them the minute she entered Tea Talk. She guessed that some friends were hiding behind the door of the 2nd level! Smart girl!

Sáng, one of the TeaTalkers, organised 3 very fun games for the party for those young, and young at heart to play. Grace's team won!

Grace's dad also made a very special video clip which showed pictures of her growing up. We found out that Grace is such a talented young lady whose abilities range from jamming on the guitar, singing, playing the violin and even basketball! Talk about all-rounded! It was such a touching gift from the dad to his daughter. 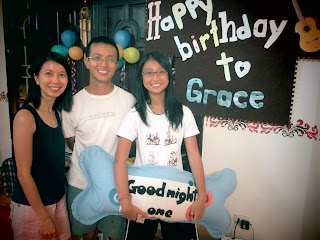 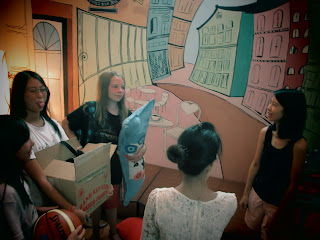 On the menu was Singapore's curry chicken, with baguette and white rice to go along. There was also fried rice. fries, and fresh salad. The guests left full and happy!

Tea Talk is honored to be a part of Grace's party, and we wish her many more happy parties to come!!!